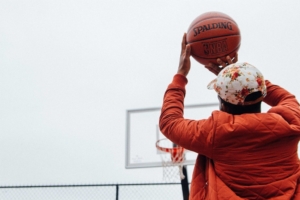 ven when he was referred to Friendship Works by his mother. She recognised that her health problems had resulted in Leroy taking on a lot of caring responsibilities in the home. This, together with the fact that it was hard for her to take him out of the house, had led to Leroy becoming very isolated.  She asked us to find a male mentor for Leroy as he had no positive male role models in his life at that time.

When Leroy first met his mentor Mat he was a very withdrawn, shy child. He found it hard to interact with adults, and had only a couple of friends at school. He wasn’t able to express his likes or dislikes, and found it difficult to identify anything he was especially interested in.

From the start, Mat was able to establish a great rapport with Leroy. Early in their friendship, Mat introduced Leroy to Basketball, which quickly became a favourite activity. Mat also encouraged him to join Boys’ Brigade in his local community. Leroy’s self esteem benefitted greatly from finding activities that he was good at and enjoyed. It wasn’t long before he gained a place in the school basketball team. This was the first time that Leroy had received positive recognition for his talents at school, and being able to represent the school was a big boost to his confidence. He has developed a number of quality friendships and has become popular and respected by a wide range of peers.

Leroy said: “Mat’s not like any ordinary friend. I can rely on him; he’s very easy going so I can talk to him about anything. We’ve done lots new things together; we visited the London Eye and the Aquarium, we went bowling, which Mat had never done before, and we’re going to go trampling soon. Since becoming friends with Mat I am much more confident making new friends, and I’ve become more adventurous too.”

Leroy’s mum says, “When Mat came into our lives, things were very difficult and he has made a massive difference – both to Leroy and to me. Leroy talks to Mat about school and personal things that he wouldn’t open up to me about. If he didn’t see Mat on a regular basis, I don’t know where he would have ended up – it’s much more likely he would have got caught up in some trouble. Having Mat around to take Leroy out and allow him to just be a child for a few hours a week has given me a different perspective on life too. Leroy opens up to me more now and we are able to spend more quality time together. We understand and appreciate each other more since Mat came into our lives. I can’t praise him highly enough.”

*name has been changed to protect child’s identity.