Crocell’s story: how having a friend and mentor helped me

Crocell, 16, writes about his friendship with his volunteer mentor, Gabrielle. Crocell was referred to our Friendship Works service in 2017 because he needed some support building relationships outside of school. 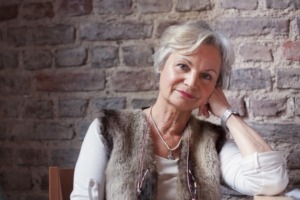 “At first, having a mentor was more something my parents were talking me into more than something I wanted to do. They recognised that I was very shy and kept to myself, and thought I needed to interact with people outside of school. When I first met Gabrielle two years ago, it was quite unnerving because having a stranger introduced to you as new friend is a weird situation.

Our first few meetings felt overly formal. When people first meet, they want to present the best version of themselves, so it is not so real. I find that appearances can deceptive and talking to people is how you get to know them. After a while, I stopped seeing Gabrielle as a stranger or just some adult, and started seeing her as a friend.

One of the things that helped build our friendship is that Gabrielle doesn’t talk down to me like some adults. I think a lot of adults talk to young people in the way that they think is most appropriate, but young people hate being patronised. Me and my friends need to be heard and understood. Gabrielle and I talk as equals. She is very calm and understanding. She gives me time to think, rather than pressing me to get on with it. This was particularly important in the early stages, but now our friendship has become like any other.

“Having someone there beside you makes it easier”

Before I met Gabrielle, I kept more to the digital space. I have found that mentoring gets you out of your shell and can push you to do things you wouldn’t otherwise do. We are both interested in art exhibitions and galleries, so a lot of our outings have been to those places. Gabrielle is like my free tour guide. I am learning things that I would not learn without her. We have introduced each other to new things. I have taken Gabrielle to some of my favourite shows and exhibitions. She encouraged me to go out and sketch in public, which is not something I would do on my own but having someone there beside you makes it easier. 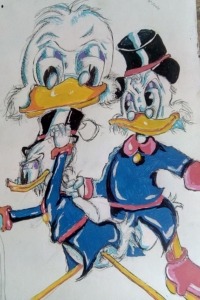 Art by Crocell, which his mentor encouraged him to create.

Gabrielle is a bit of a dork, and our friendship is very silly and light-hearted. It is really positive. I like to think I am a positive influence on her, and she has definitely been a positive influence on me. She has got me to be a lot more active. Now, I don’t just go to galleries with her – I invite my friends to galleries with me. Last summer, one of my friends got me an application for a course at Cubitt with Central St Martins. For our final piece of work, we assembled an exhibition of our work and all took on different roles. My job was to curate the exhibition – I decided where each piece should be displayed.

When I think about what makes a good friend, I would say that you need to be similar, but at the same time different. Gabrielle and I have things in common, but it is also good to have different perspectives. I think it is very dangerous to only surround yourself with people who have the same views as you, because you get stuck in a bubble. My advice to any other young person considering getting a mentor would be to give it a try, even if it seems it’s not for you. You never know – you could be pleasantly surprised like I was.”

Friendship Works is recruiting new mentors. Find out how you can volunteer to mentor a young person like Crocell. If you haven’t already read Gabrielle’s story here. 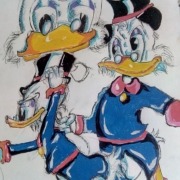 A mentee from our Friendship Works service.