Sam’s Story: How a box of bright balloons was the best Christmas present ever

There’s a lot of pressure on parents to ensure Christmas is magical for their children, and many of us can fall into the trap of overspending on toys for our kids – even when, as in the story one father tells us below, the child is really too young to appreciate it. Here’s how he solved the problem and provided his son with the ultimate Christmas present.

It was four Christmases ago and my wife came to me with a purposeful stride and serious look on her face. “We need to talk”. She seemed so serious that for one second I wondered if she was seeing somebody else. “We need to talk about Oscar’s Christmas presents”. Ah.

We’d talked at length about presents for our two-year-old and decided that, since he was really too young to appreciate what we might buy him, and would be spoilt rotten by grandparents and doting aunts anyway, we were going to skip presents this year. In fact, it had been a tight period all round and we’d agreed that we wouldn’t spend too much on each other either, and would just put a little away for a night out and a meal in the New Year. However, it seemed that my wife had now changed her mind.

“I know he’s going to get so many other presents and I know that he won’t really care or even notice, but… but what if he does? I hate it when things make him sad – do you remember how inconsolable he was the other week?.” I knew where she was coming from… we’d visited Lincoln Christmas market that weekend with family and a helium balloon we’d bought him came loose from his pram and drifted off into the sky. He’d not just cried – he’d grieved. Huge gasps between big blubbery tears. I told my wife this wasn’t the same – that presents were expensive, that it was now VERY close to Christmas and, besides, he’d probably just prefer a balloon! 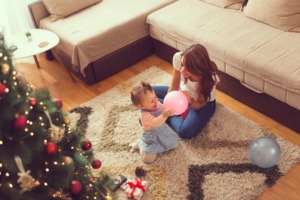 A light bulb goes on

I told my wife not to worry about it, that I’d sort it, and that it wouldn’t cost too much – which is when I decided to wrap a huge box full of balloons for my son for Christmas! Finding the box was hard, especially on a small budget. I needed a huge box for the effect I wanted, and the best big boxes I could find were at companies that sold boxes for moving houses. But these were expensive at around a fiver. Then I had a stroke of luck, and found a bunch of abandoned boxes as big as the ones I was looking for outside a self-storage place. I asked if I could use them, explaining what they were for, and the kind lady on reception said they’d been left by somebody renting a unit, and I was more than welcome to take them.

I resolved to fill the balloons Christmas Eve, so there was the minimum chance that the balloons would run out of gas before the morning. I’m not sure exactly how long it took, but I watched the whole of the movie Scrooged and ate three mince pies. I had my box, but now I needed balloons! These were a LOT easier – I ordered the balloons and helium gas online. I knew that strictly speaking the helium wasn’t necessary, but for some reason it was VERY important to me that the balloons float up to the ceiling when he opened them! (I suspect a lot of parents out there will agree with me.) Finally, I needed to find some wrapping paper. I knew a lot was needed so I got four rolls of inexpensive, brightly coloured paper with words like POW and ZAP on it from my local supermarket. And then, on the way back home, I cracked and stopped by the greetings card shop to buy a huge pre-filled helium balloon with that silver foil backing in the shape of Batman… because everything’s better when Batman’s involved.

“As we flipped the lid the balloons rose into the air as he lifted his head skywards and uttered one of the few words he knew, “Balloons”. Totally. Worth. It.”

I was strangely nervous when the morning rolled around… what if I’d been wrong? What if he didn’t like them? My wife was carrying him as we all padded into the front room in our pyjamas, barefoot on the cold wooden floor. He made an “uh” sound, cocking his head as he was put down, and then ran over to the enormous box burbling with excitement. I had to lift him to the top where he tore at the paper (top tip for any parents wishing to do this… wrap it really loosely!).

As we flipped the lid the balloons rose into the air as he lifted his head skywards and uttered one of the few words he knew, “Balloons”. Totally. Worth. It. I’ve still got a photo of him standing among the silver and gold strings we tied to each balloon, creating a backdrop like a curtain in a cheap disco, his eyes fixed in wonder upon the ceiling.

My wife and I never did get away for a meal in the New Year… instead we got a takeaway and sat watching TV among dozens of balloons we couldn’t bring ourselves to take down. Instead they all fell one by one in the days after Christmas. All of them, that is, apart from one, which was still with us when Spring rolled around. We should have expected that one would be made of sterner stuff… after all, it’s Batman.

If you want to spread some Christmas cheer this year, and help relieve some of the pressure faced by disadvantaged families, you can do so by getting involved in our Christmas toy appeal. Find out more here.

An inventive father to a two year old