Volunteering at our FOOD clubs this Christmas

Food On Our Doorstep (FOOD) clubs provide low cost, healthy and sustainable food for families on a budget who are at risk of food insecurity. The valuable work of our FOOD clubs is only possible because of a network of committed and passionate volunteers who help us to ensure we reach those who need support the most. Here we speak to two of these volunteers and hear how an unprecedented year prompted a lifestyle change that benefitted both of them, and the community they serve. 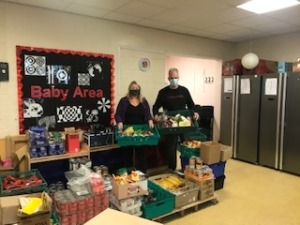 At the beginning of this year married couple Emma and Richard thought they would spend this Christmas preparing for the trip of the lifetime they were due to embark on. They retired last September and had planned a year of travel, exercise and adventure – ending it with a trip around New Zealand, Australia and Indonesia in January 2021. Instead, they’ll be spending this Christmas and New Year side-by-side volunteering for Family Action’s FOOD clubs in Greater Manchester, organising stock and distributing food to families on a budget.

Although not nearly as glamorous as their original plans, the pair are looking on the bright side. Emma said: “We wanted to do so much this year but COVID threw a spanner in the works. “Everything stopped, the gyms closed and holidays became impossible. We wondered how we could support people during this difficult time, give back to the community and keep ourselves occupied… and that led to the FOOD Club”.

The pair coordinate the stock that comes into the club, which is then distributed onward to families, who pay a small fee for a bag of assorted food. It’s a role that particularly plays to Richard’s strengths, who worked for more than 30 years in the field of food distribution and technical management for various supermarkets. He said: “Coming from a supermarket background I know how deliveries work, so I can do things like stockpile, so the following week everyone will get enough of everything. I’m often thinking ahead and planning what we use, as I want to make the first box as good as the last and ensure everyone gets as similar a service as possible. It doesn’t matter whether you turn up at the front of the queue or if you’re the last, you’ll get the same quality”.

“It doesn’t matter whether you turn up at the front of the queue or if you’re the last, you’ll get the same quality.”

Although they share the workload, former teacher and chemist Emma tends to handle the administration and customer service aspects of the role, something she finds personally rewarding. She said: “It’s about that sense of ownership. We know the names of the families who visit and they look forward to coming – I think it’s nice to meet new people and make friends. It’s a professional relationship and it’s not like we’re going to be going down the pub together – not that you can anymore! But we’ve definitely met new people and feel closer to the community”.

Oddly enough the rain-soaked Manchester locale has even provided some of the quality time together they craved when the year began… even if the weather doesn’t compare to down under! Emma added: “We look forward to going actually. We’ve spent our lives working apart and it’s nice to have some time as a couple and, luckily, we have complementary skill sets so we don’t step on each other’s toes. I’d be lying if I said there wasn’t a disagreement or two but, in the main, it’s been very interesting to work together… without a doubt”.

They add that they were surprised by how much training Family Action gave them for the role to ensure families were safe and they were aware of food hygiene and says it shows a real investment in their staff. Emma added: “Family Action expect a lot of their volunteers and I think what’s nice is the amount of autonomy and trust we’re given. The organisation trusts us and that’s a nice feeling”.

The FOOD club works with supermarkets and charities to ensure that food isn’t wasted and, for the couple, this is also an important aspect of the work they do. Richard adds: “For me the whole business of this food not going into landfill from an environmental standpoint is enormous. When you multiply that by every FOOD club in the country, Family Action are making a huge difference”.

It may not be the surf, sea and sand they were expecting, but for Emma and Richard, this is still a Christmas they will remember, although Emma is keen to stress that the FOOD club is needed all year round. She added: “It’s not just about Christmas as people struggle every day. But it’s great to know that we’re helping people… That’s the reason why we do it”.

Get more stories, ideas, and inspiration to make your Christmas magic or contact our FamilyLine for information, guidance, and support on an issue affecting your family.