Simon’s story: Discovering my love for food and cooking for others by becoming vegetarian

The decision to become a vegetarian is an increasingly common one and is reflected in the growing amount of vegetarian and vegan options available in our supermarkets and restaurants. However, many people are put off removing meat from all or some of their diet because they’re unsure of how to replace it in meals or lack confidence regarding their own food preparation skills. Here Family Action FOOD Club Coordinator Simon explains how he threw himself into vegetarianism with abandon and discovered a life-long love of food preparation and meal planning as a result. In 1992 I became a vegetarian for a bet. Living in a house of rabid meat-eaters during a recession, we decided that we would experiment with a meat-free diet for seven days. But we needed more of a challenge, so the grand sum of £5 each was put in a pot with the agreement that the person that lasted the longest without eating meat would claim the prize.

I sit here in 2021 almost 30 years later, still having not consumed meat… and still having never claimed my prize. I do, however, realise what an influential time the period of transition was. I learnt how to cook and I learnt about flavour, ingredients and balance. If something fundamental is removed from your diet you have to adapt and find replacements and alternatives, and this was my challenge over the first few years of becoming a vegetarian. Where on earth was the protein we need going to come from? This was in an age before the ubiquitous “plant-based” sections in supermarkets, and even before the game-changer that is Quorn had become established.

Originally, I was a bit of an “egg and chips” veggie rather than a brown rice one but, as I approach 50, it is the other way around. I love grains, beans and pulses; black rice, black beans, red rice, red lentils, quinoa, chana dal, bulgar wheat, chickpeas, freekeh, cannellini/broad/kidney/black-eyed beans… the whole lot! It took a lot of work to get to this stage. Like many things in life, it took time, effort, perseverance. Friends mocked, family joked and (some) restaurants pretty much ignored my particular dietary requirements.

“Cooking became a creative outlet and a way to relax.”

As my palate developed, I broadened my weekly repertoire of dishes and I loved chilli and the lure of spices. I grew up near Birmingham, moved to Leicester and was a student in Hounslow so I was surrounded by amazing south Asian food which often leant itself to vegetarian or vegan dishes. I spent hours in the colourful grocers and sweet shops of Hounslow East and Southall and I collected a vast array of cookery books from birthday and Christmas presents, which quickly became splattered with experiments in flavour. 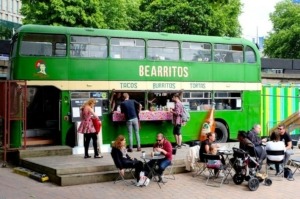 After running a Street Food stall making meat–free tacos, the opportunity to run a business full time came around in 2015. I opened Bearritos, a Mexican and Californian influenced cantina in a converted Bristol double–decker bus located within a sunken roundabout in Bristol that’s informally called “The Bearpit”. Cooking for friends and family can be challenging but cooking for the public is another thing entirely. I learnt about prepping on a large scale and how to keep flavour and depth in dishes whilst ensuring that dishes tasted the same, whatever the month, day or time

After the business finished, I took many of my learnings and used them regularly while cooking at home. Understanding the importance of your base sauce, how you properly cook onions and the influence they have on dishes and learning from online sources as well as books all mean that I can plan ahead and create interesting dishes from batch cooking a tasty tomato sauce. With additional spicing and ingredients, that magical sauce can be used to make a curry, a chilli, a Moroccan style stew, a pasta sauce, a noodle sauce… lots of different dishes. Adjust the veggies and the carbs and you’ve got a few days meals out of one session of prep. Plus, the ingredients are relatively cheap. Also, if you make those veggies seasonal then you are reducing your impact on the environment and can bask in the warm glow of eating meat–free, seasonal and maybe even local delicious food.

You can find a wide range of healthy, tasty recipe ideas on our Online Links page. 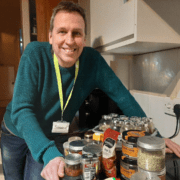