A story about pre and post pregnancy, resilience, and a very special space online

As restrictions loosen and our lives once again return to something approaching normality it’s easy to look back over the past year and think of isolation and separation. However, if we dig a little deeper, we’ve also seen new support networks blossom and provide a support structure for families that will continue.

Here mum of two Helen Campbell explains how a Facebook group for parents became a lifeline for parents in her community.

When COVID-19 first hit I felt reasonably okay about it. I’m a full-time mum and my husband works quite long hours, so having him working from home was incredible. The first week was the best as we could have family meals together, and it was quite a novelty to have him here at breakfast time and teatime. But I know this wasn’t the case for everyone. 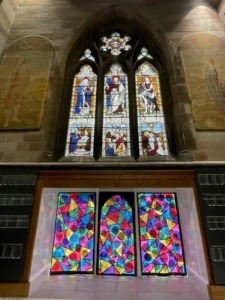 I wasn’t particularly active on social media at the time, but I noticed that when lockdown happened in March 2020 lots of different community groups became much busier – everybody was coming together and sharing the good and bad things that were happening to them, as well as offering support to one another. One thing that really affected me, however, was when I saw a post from a mother of a week-old baby asking where she could get some safe, responsible takeaway food. I felt sorry for her as, when my kids were that young, I relied on family and friends coming round with food packages, and so I messaged and asked if I could bring some homecooked food round while staying socially distanced. She politely said yes and after a few messages I asked her whether a Facebook group in our area dedicated to pregnant or recent parents together would be useful.

Although I do have two young boys, my eldest is already four so, when he was young, I’d been to mother and baby groups and had conversations and made friends with lots of other parents. Because I was in those environments, I had experienced what a valuable source of comfort meeting other new mums and dads could be… and I suddenly realised what some parents whose first children had been born before or during COVID were missing. I set the group up on 8th April 2020 and it was immediately clear that it was something parents needed.

I dropped off a few more bundles and food packages to other families over the next few weeks and local supermarkets even donated food to us to help. Very quickly, however, it became clear that while dropping off food was a nice thing to do, what most people wanted was to share experiences and ask questions. It was the same stuff we would have chatted about in mother and baby groups, like “what’s the situation at the local hospital?” or “where feels COVID safe, quiet and spacious to go for a buggy walk?”

It became a very supportive group with local information that was relevant to people’s situations and it became hugely popular very quickly – we’ve got over 1,100 people in the group now, which is mind-blowing. It’s just been incredible and, as lockdown rules have changed, it’s moved from being solely online to existing in the real world in some cases after we decided to hold dedicated buggy and pregnancy walks. Again, these were mums who would naturally have met at a mother and baby classes and getting them out to experience all the mental and physical health benefits of being outside was hugely important. We even had local businesses join to offer our mums things like dedicated soft play sessions and professionals like Family Action’s children’s centres and health visitors come on board to share information.

“The point about being resilient is doing it your own way, at your own speed. There are no rules.”

I think that we’ve stayed relevant for families by posting daily about a variety of topics, especially during the stricter lockdowns. We’ve themed the posts around topics such as “positive pants”, which focused on bringing fun and positivity on a topic each day such as comfy mummy clothing (and big pants)! We’ve also had people post about more serious topics, however, such as preparing for a c-section, weaning, tips for night-time sleeping and post-natal depression. Personally, I found it inspiring and rewarding to see how many parents have contributed to the discussions to share their own experiences.

During the winter lockdown, we started daily activity posts based on key national days or things happening around the world. One post I distinctly remember was that we had a space-themed day when the Perseverance rover landed on Mars, and people got their books out and read about space with their babies as well as making glittery star sensory bottles. It was a nice reminder that there was life outside of lockdown, and life beyond it, and importantly gave parents new inspiration for activities with their babies at home.

I also think that the group has given us the resilience to move beyond COVID-19 and carry on as the restrictions have changed. The posts have increasingly begun to look forward to things like going to restaurants with babies. That’s why I think the group will continue after lockdown… I just think it will morph into dealing with questions about childhood – like “should I be getting my children onto rainbows or beavers waiting lists?”

The reality is that it’s become a lifeline and people have formed friendships for life. I think keeping it local has brought the group much closer together as posts and support are not only about general parenthood, babies and pregnancy, but there are a lot of posts which are very “local” based and related. I think that there are a few societal issues that have become obvious and will have to be dealt with after COVID-19 – grandparents who’ve never held their new baby grandchildren, for instance, or parents worrying about the effect that all the isolation will have had on their children socialising.

I’ve also spoken to a lot of parents who feel like they’re going back to work without having experienced the maternity leave they envisaged, and as a result I’m encouraging baby class leaders to run weekend classes where people can experience the parental community they might have missed.

It’s not all negative though, as I’ve spoken to parents who’ve relished things like the privacy that comes from not having a constant stream of visitors, the time to spend with family, the fact they can breastfeed at home in private and don’t have to “clock watch” to ensure they meet appointments. In general, people differ in their views and for every parent who is worried about going back out into the world and letting people hold their babies you’ve got a bunch of parents who are gung-ho and want to get on with it. But there’s not a right or wrong way to feel…. There are so many different scenarios and emotions that are going on. The point about being resilient is doing it your own way, at your own speed. There are no rules. I’m just pleased that people feel that they’re safe to discuss feelings and emotions, and feel that they can express themselves through the group.

Not all families have access to support networks in their local area – online or otherwise. If you feel that it’s hard to know what information and support is available our free FamilyLine  helpline is here for anyone aged 18 and over, whether you need information, support or just someone to chat to. Parent and administrator of a Social Media group for Families.