Pregnancy and birth during lockdown

For many of us across the UK, the entire experience of parenthood has been shaped by the Coronavirus and the different society it has created. Here mum Kalley talks about her child’s first year in the pandemic’s shadow and what she’s looking forward to as we emerge from it.

We found out I was pregnant just before the first lockdown. We got married in November 2019 and although we weren’t officially trying for a baby, we weren’t, you know… not trying – we just didn’t want to put pressure on ourselves to conceive as I am naturally anxious and I just wanted to see what happened. I’d taken a test as I’d just felt weird – extra hungry and a bit travel sick when my husband drove – I honestly thought it was just his driving! 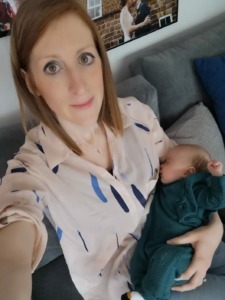 But one day I was in a pharmacy and intuition just told me to pick a test up, so I couldn’t believe it when it showed I was pregnant. I came downstairs to show my husband and all he said was “what does that mean?” It was a bit of an anti-climax!

I was trying to scrape myself off the ceiling… but he brought me down quickly. We still joke now whenever a man on TV or an online video is overjoyed about finding out! I think he was just overwhelmed as he was pacing up and down the living room as we video called our parents to tell them about it.

The timing was difficult as we’d agreed to not tell anyone, but I was given a furlough form at work and one of the questions asked if I was pregnant. It would have felt really shady not to mention it so I had to tell my boss, but she was lovely and kept it secret for me.

I mostly enjoyed my pregnancy but parts of it were hard and stressful, to be honest. My mum’s an ex-midwife and I’d secretly always been counting on her support, but I could only see her occasionally during pregnancy and she couldn’t hug me… even some of the “real” midwife appointments had to take place over the phone. It felt like something huge was missing and that was quite upsetting.

There were other little things too like my husband not being able to come to the scans… I found that heartbreaking and we paid privately so that we could see and hear the baby ourselves, even though there wasn’t much to see at the time – she was just a little bean. But the worst thing happened at 13 weeks.

It was my husband’s birthday and I was gearing up to make it special. This was during a break in lockdowns so we planned to have an outdoor party; I had all these plans and I tried to jolly myself along and be a hostess… It was fine, despite me not feeling great. I woke up in the morning covered in blood – I was crying my eyes out and my husband had to call an ambulance. While they were coming I passed some clots and, when I passed a big one, I absolutely broke, I thought I’d passed the baby.  I just kept telling the paramedics “I’m sorry, they’ve gone… they’ve gone”.

It was the first time I’d ever been in an ambulance, and I had to ride on my own because of COVID. I was just numb, even though the paramedics were so understanding but, as bad as it felt, I knew I had the support of friends and family; many of whom had the experience of miscarriages. So I reached out to them at that point and told them I thought I’d lost the baby… I just felt like there was no way that couldn’t be the case.

The worst thing was that they couldn’t work out if I had lost the baby or not. I was discharged and had to come back the following day. I sat there with my husband feeling empty but, when they did the scan, the baby was there sucking her thumb. Even though that was reassuring I was still so anxious and I was constantly checking myself to see how I was feeling in the weeks afterward.

“For me, this has felt like a process of rebuilding and I feel stronger with each family member I meet.”

Life continued as before and I returned to work, which filled up the days until, at my 32-week appointment, I was signed off and told not to work…. Which was rubbish! I went from full pay to sick pay to maternity pay – which isn’t ideal when all I could really do was browse shopping sites online!

The timing of going into labour wasn’t ideal – we’d had our first wedding anniversary and I’d sucked it up and gone out to a restaurant as there was another break in lockdown. It wasn’t very romantic and the best I can say is that we did it and got through it but I felt horrendous. It was still a long time before my due date but I thought “it shouldn’t feel like this”.

It was the week before we were planning to pack the overnight bag so I was sitting on a towel with my husband running around putting things in a bag… It was comical as he had no idea what to pack. If anything sums up the experience of having a child during lockdown it’s that night, where I was dropped off on the doorstep of the hospital at 4am on my own, clutching a bag full of odd clothes in the freezing cold! I was there on my own until the following day when he was allowed to visit for just two hours the following afternoon at 2pm. I was absolutely livid!

What’s worse is that, having a midwife for a mother, I didn’t want to be seen as complaining, so I didn’t tell anyone about the pain – My mum even told me over the phone that I needed to buzz the midwife but I said “I don’t want her to think I’m a wimp”. I was just so anxious and upset about the situation and so I just curled up in a ball on the bed, and that’s how my consultant found me… It turns out I’d got to 10cm without any pain relief.

My husband seemed to turn up immediately and that made it ok. The delivery room had none of the things I planned – no water or special music – but with him there it was all fine, and I gave birth to my beautiful baby girl. We had kept our baby’s gender a secret. With Jonny being unable to attend appointments and scans, we thought it would be nice for him to find out first and tell me. He was so overcome, he mixed his words up and suggested we had a boy – but there was our baby girl! 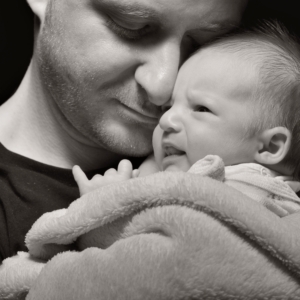 Because she was so early we had to stay in for five days, but my husband could still only visit for two hours each day. He had to come in the evening, but it helped me get through the day.  I was particularly upset that the first few times my daughter saw her daddy, he was wearing a mask… but she seems to be ok, and she won’t be the only one her age with that experience. Despite it still being lockdown when we got her back home it felt oddly freeing after the hospital. It felt like I had so many options! I could tidy and cook. It sounds odd as I’d felt like melting down sitting around the house before, but the options now felt staggering!

Since then it’s felt like we’ve got a little bit of life back a day at a time. We’ve had to meet friends and family in people’s gardens, which was hard after a winter birth, and some of my friends still haven’t met her, but we’re getting there. My husband put it well when he said that it doesn’t feel real until people have met her. I agree, but it’s also been kind of positive in one way as my husband was allowed a lot longer off work and so we’ve had a lovely little bubble where we could just be. We could sleep when she slept and build our lives around her needs.

My anxiety has led to complicated feelings about getting out. I want people to meet my daughter but I’m quite an introvert and so with restrictions lifted I’ve forced myself to go out and see people. Honestly what’s helped the most is hot chocolate and cake! I’ve met a lot of friends in coffee shops and finally have that experience I envisaged as a new mum. I couldn’t have done this without the support of my husband and mum. Our families have loved having something positive during such a difficult year! For me, this has felt like a process of rebuilding and I feel stronger with each family member I meet. It’s made me realise that, despite it all, we’re all so lucky to have each other, and my daughter is a lovely reason to focus on.

If your family has had a tough time during the past year, or you just need someone to talk to, our free FamilyLine helpline is available for information and support. 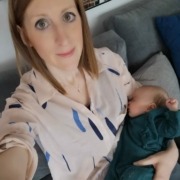 Kalley is a mum whose entire pregnancy has been shaped by COVID-19.