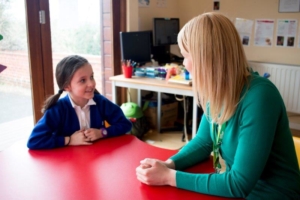 Esme can’t remember a time when her mother didn’t have a brain tumour – she was told at just three years old.

It hadn’t had much of an impact at first – her mother had continued in her role as an occupational therapist, and Esme and older sister Anna enjoyed an idyllic childhood of ballet classes, music and home cooked meals.

But when Esme turned nine in 2016 it was clear things weren’t quite right.

Esme said: “Mummy started repeating things and once she started doing it she wouldn’t stop”.

With mum now at home receiving support Esme began to struggle with fears for her well-being while at school – finding it hard to concentrate if she happened to hear sirens coming through the window.

She added: “I worried about her when I wasn’t with her because I didn’t know what was going on”.

Things got worse and in April adult social care contacted Family Action – leading to a visit from Support Worker Belinda.

Esme added: “I didn’t really know what was going on but I wasn’t anxious because she looked like such a friendly lady” 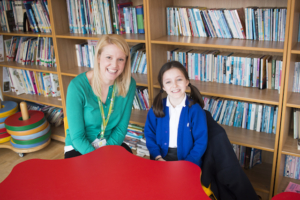 In September Esme’s mum was moved into a hospice as her condition continued to worsen.

Belinda ensured the school were aware of the situation and helped the girls to visit mum whenever they liked as well as ensuring that they continued to maintain active social lives – including arranging an adventure weekend away in the Lake District.

Esme remembers: “It was fun – I was the youngest kid there and I was one of the bravest!

“There was a giant climbing thing which an 18 year old didn’t want to go on but I did”.

However despite some moments of recovery it was clear that Esme’s mum wasn’t improving and so Family Action made the decision to begin pre-bereavement work – drawing pictures, creating gifts and talking about Esme’s expectations.

Esme said: “I thought my mum was improving so it was a shock when I found out she was getting worse, and wouldn’t get better,”.

Esme wanted to spend as much time as possible with her mum in the build-up to her death and visited daily – communicating through pictures as her mum couldn’t speak.

When her mum died in comfort at the hospice in October Belinda commenced post bereavement work – creating a memory box and discussing beliefs. Nowadays It’s clear Esme’s mum is still very much on her mind – “Sometimes I wish I could smell her hair again… the duvets still smell like mummy” – but Esme says she enjoys talking about her mum and feels that doing so has gotten easier with Family Action’s help.

She said: “Belinda helped because I could tell her anything I was feeling; If it was getting too much for me or if I was feeling sad that day”.

“Family Action are really helpful and you can tell them whatever you like and they will listen to you and help you”.