The school that… was popular right out of the gate

We look at how Wallington Primary Academy have been getting on as part of our National School Breakfast Programme, making sure children aren’t too hungry to learn

Wallington Primary Academy had not had great attendance at breakfast clubs in the past – with the existing paid club attracting just three members.

The Surrey school knew that the high number of pupil premium children on roll meant that the National School Breakfast Programme should be attractive to parents, however, and decided to proceed with an approach they dubbed “build it and they will come”.

This meant approaching parents to be part of the new initiative, trying to increase community involvement and working based on the assumption that parents would be interested.

And come they did!

A massive 150 children attended breakfast from the start of delivery and numbers haven’t dropped since.

This meant a slightly different approach from what staff had expected as none of the rooms were big enough to accommodate all the children and their parents.

Head of School Nicola Wright said: “First we were worried whether anyone would attend…but our concern soon changed to whether we would be able to meet the demand!”

“During the first week, all food was placed on one table, with members of staff preparing it and recording who had eaten. We underestimated the popularity of the initiative and this method was not sustainable.”

Instead they followed the “bagel bar” method – utilising a huge, outdoor, sheltered area with picnic tables to ensure there was enough room to accommodate all attendees. Some of the experienced staff who had worked in the paid breakfast club were brought in to support, as were the Teaching and Emotional Literacy Support Assistants who didn’t have sessions first thing in the morning.

Another innovation was that the school opened its gates ten minutes earlier to allow for a relaxed start to the day.

The solution has paid dividends for the school.

Nicola added, “Within the community it’s very visible –our children are running in because they want to be here early and enjoy breakfast with their friends.“

The delivery method means that young people often prepare their own breakfast under supervision, which has meant that the bagels have become the most popular breakfast item.

Nicola added: “Our students are obsessed with bagels… A parent of a nursery child, who I spoke to yesterday said that her child has asked for bagels at home, but when they did the child wasn’t so keen on them because they ‘didn’t taste like they do when Mrs Goldsmith does them’!” 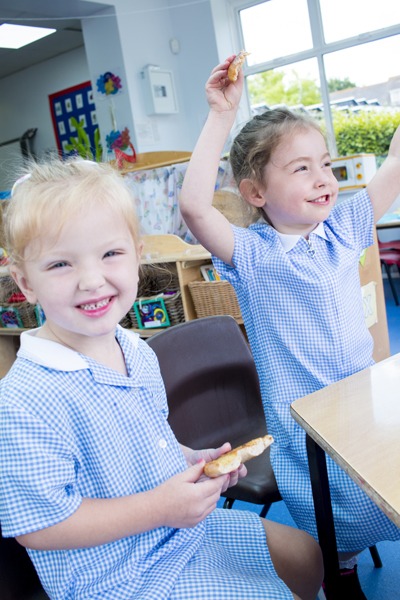 The main challenge for the school was just the volume of children attending.

The freezers and toasters purchased with the NSBP grant have been invaluable for smoothing out variations in numbers. Staff have also played smart by taking out the stock for each day based on the demand of the previous day and toasting batches early to ensure they can beat the morning rush.

Still, sometimes demand has outstripped the capacity of the school to store food.

Nicola added: “We have run out on a couple of days… not through anyone’s fault – just because demand on those days was phenomenal.
“There have been days where we were catering for up to 190 children and that can be a little bit tricky.

“We did have to top up with bread on those days, and we found that cereal became more popular.”

The massive uptake and open-ended delivery is also ideal for opening up the programme to everyone and preventing barriers to entry.

Nicola added: “We didn’t want to be seen to be targeting anybody – we wanted it to be very inclusive, so there would be no stigma attached.

“No child should feel labelled as needing to have a breakfast at school – it should be a choice for all.

“Previously, teaching assistants would often make a piece of toast, or collect some fruit because some children were not always eating before school and this was having a negative impact in the classroom.

“Since the programme began, I do not remember a single concern raised that a child has come to class without having a breakfast! The programme has had an incredibly positive impact on the whole school community – from the relationships built over a bagel, to the improved levels of focus and conduct in the classroom.”

The school went into special measures last year and Nicola is part of a new leadership team rebuilding the trust of parents.

The team agree the new breakfast programme has been instrumental in promoting engagement.

Nicola said: “Some of our families have been hard to reach, in the past. These social situations are really important to build relationships between staff and parents, so that when you do have to have a more challenging conversation there is already a positive relationship there.”

“Aside from the obvious benefits to providing a healthy breakfast to all children, just the idea of parents coming in for breakfast with their children is actually having a very positive impact.”

The self-service model works well to promote independence and teach self- help skills – especially as the school delivers the programme in the nursery and to a significant number of children with additional needs.

Nicola adds: “Often, students are developing their own self-help skills without realising it as they’re preparing their own food. They are also growing in independence through the breakfast sessions, which complement work going on in the classrooms.”

“Also, all the children love the social aspect because they are not going straight into class but are able to talk with friends and family about whatever’s happening in their worlds… the football match the night before, for instance.

They have the time to do that before they start learning, so their language and social skills are developing and they are able to settle down to learning in the classroom in a more focused way.”

If your school hasn’t yet signed up to the programme, or wishes to find out more about the work we’re doing in this school and others across the country, click here