Most of us will have heard someone describe the past year as resembling “groundhog day”, with each day feeling much like the last. The current lockdown in particular has felt like the final straw for many, who have spoken of their frustration at returning to a situation we first experienced a year ago with seemingly little change. Mum Karin, however, feels that despite their similarities these two lockdowns were fundamentally quite different. Here she discusses how each of the two longer lockdowns has had its own character, and what that’s meant for her and her family. 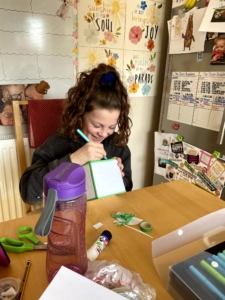 Last March the parents who gathered on the school playground at my child’s school had already begun to talk about the possibility of schools closing and on the morning of 17th March my 11-year-old daughter’s school sent an email to let parents know that the school would be closing that afternoon due to staffing shortages. Just the next day we learned about my then eight-year-old son’s primary school doing the same. Just three days later all schools in the UK closed for the foreseeable future. It was a blow to parents everywhere, including myself. How were we going to handle this? How would we manage childcare?

Within a matter of days, those of us who weren’t key workers were all now teachers educating at home! I chose to see the initially daunting task as an opportunity to provide my children with an education I thought they would love. I turned to Google, free education resource Twinkl and a plethora of online resources. My printer got a workout printing off resource after resource! I was going to be the best home educator ever and it was going to be brilliant… Or so I thought.

During the first lockdown, I wasn’t working. I had been unemployed for just under a year so I was able to focus my time on supporting my then Year 3 & Year 7 children with their studies. By day three of the first week of home educating, I had gained a massive amount of respect for my children’s teachers. My son’s primary school had prepared home learning packets for us to collect from school which included printed off worksheets and resources, exercise books, pencil cases and some subject workbooks. I expected that I would be able to present worksheets and assignments to my son and he would just get on with the work. How wrong I was! He needed a lot of supervision from me, including clarifying instructions and asking what to do after most questions. I knew that part of this was because it was “Mummy” teaching him and he had my – mostly – undivided attention. During this first national lockdown, the opportunity to have online lessons or resources was virtually non-existent. The whole world would soon learn about how to manage a Zoom call/session but in March 2020 it was relatively unknown.

My daughter’s secondary school took a slightly different path to learning. Online lessons were not yet an option and platforms such as SharePoint, which allow you to share lesson plans and resources, were only just beginning to be used. Our secondary school chose instead to remind parents about the importance of maintaining good mental health and wellbeing and allowed parents and students to make decisions about how much effort they would be putting into home learning. As the weeks became months, we chose to do what interested my daughter most and spend more of our time learning creatively.

My son’s interest and engagement in his work took a turn for the worse fairly quickly. He had always wanted me to home educate him but within three weeks he decided that home education was not what he thought it would be. He is a very bright boy who picks up learning very quickly but when we were following the worksheets and guidance from school he regularly ended up in tears and we were forced to abandon his assignments. To preserve my own sanity as well as my son’s mental health, I chose to stop forcing him to do the work sent home from school.

We chose to learn creatively, as we had with my daughter, focusing on subjects that interested him and kept up his basic skills. I knew that both of my children were in the same situation as the majority of their classmates. I knew that they wouldn’t be returning to school for that academic year and wouldn’t be expected to submit work from their home education time. I knew that the schools would be forced to backtrack a bit to get everyone back up to speed when children returned. Knowing all this I chose to take the pressure off myself and my children and enjoy the unique opportunity we had to spend time together. Home education took a break and instead we made memories.

“Knowing all this I chose to take the pressure off myself and my children and enjoy the unique opportunity we had to spend time together. Home education took a break and instead we made memories.”

The third lockdown began one day after children were to return to school following the Christmas break, and was far more like the first lockdown than the second, when schools had remained open. Thankfully, despite the short notice, the use of platforms such as Zoom, SharePoint and Microsoft Teams had come a long way since March 2020 and schools were prepared to use “remote learning” fairly painlessly. In our house, we now had Year 4 and Year 8 children who were well trained in Zoom etiquette and who knew how to search for assignments and messages from teachers in Teams.

Again, our primary school prepared learning resources which we were able to bring home. They now check in twice a day with their classroom teacher via Zoom meetings. Unfortunately, my son’s school doesn’t run those sessions as lessons but simply as an opportunity to check in, see each other and answer any questions they might have. We are given daily assignments and resources to aid us with home educating once again. They also have a weekly “celebration assembly” where the whole school tunes in to see who’s being recognised for their effort to learning that week. These are not my son’s favourite thing as he’s quite shy but he attends regardless.

My daughter’s secondary school has committed to providing one to two online lessons each day and use Microsoft Teams to hand out work and assessments. Due to the reduction in face-to-face lessons my daughter, who really enjoys learning and is a model student in class, is struggling to engage in the subject matter and is just coasting by with the assignments and work. It’s hard to see her losing her interest in school and it’s also hard for her to be missing out again on the social aspect of secondary school. She’s become quieter and spends more time in her room than she ever used to.

The next biggest difference during Lockdown three is that I am home educating while working from home in a part-time job during the hours that the children are expected to be learning. This has meant that both of my children have had to become more independent. This has actually been a good thing for my son who has definitely become more confident and motivated as a result. Due to my work commitments, I have not been able to hover over him as I did during the first lockdown, which has been a good thing for both of us. 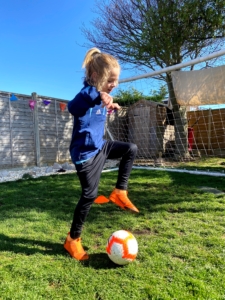 We have seen a definite increase in the amount of screen time for both children. As they are missing out on seeing friends and having fun in the traditional ways, I have allowed both of them to connect more via online platforms so that they can still socialise with their friends. My children have both been fortunate to be able to do their respective sports (football and dancing) via Zoom lessons in our lounge, which has kept them connected and active. I think they both would agree, however, that if they never had to have a lesson or social quiz on Zoom again that would be perfect!

Lockdown one felt very new, scary, anxious and emotional. Lockdown three has felt less intense but also quite exasperating. The schools have progressed massively and have been able to offer more to support children and parents but it’s remained very difficult to achieve everything that has been sent. Having survived the first lockdown with my sanity relatively intact I remind myself not to feel under pressure to tick every box, turn in every assignment or force my children to crack on with their work this time.

I know our children will be returning to school this academic year (hopefully sooner rather than later) but I also know their basic skills remain strong and that they are very resilient. They will bounce back and catch up quickly. I also feel stronger myself because I have had work to do during this lockdown. As a result, I have been more positive, more creative, happier and less stressed…. which seems a bit odd.

Having to work from home and home educate is far from easy. I get interrupted far too many times each day but my children have become more independent and seem happier as well. We’ve tried to remember what we’re grateful for and look forward to resuming our normal life in a few months. I can’t wait to be a “taxi mum” again!

If you feel overwhelmed with the pressures of lockdown or providing home learning you can contact our FamilyLine service for emotional support and guidance. 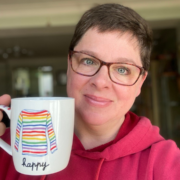